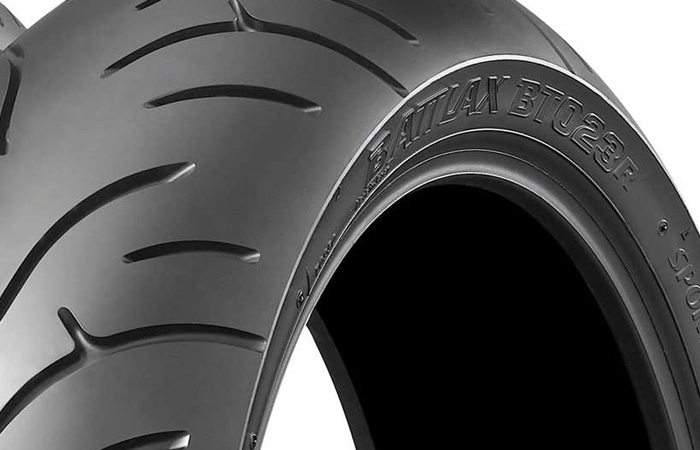 As all manufacturers do, Bridgestone is making a multitude of claims for its new sports-touring tyre, the BT-023.

As all manufacturers do, Bridgestone is making a multitude of claims for its new sports-touring tyre, the BT-023.

Amongst the promises for the rubber, which replaces the firm’s BT-021, are improved grip and wear, extra stability, and even better mpg and reduced noise. Bolder still is the assurance that the BT-023 is the most advanced sports touring tyre yet, offering sports tyre levels of performance without sacrificing durability.

Theories being one thing and practice being another I spent many miles on many different bikes testing the new tyres, and have to say I’m very impressed with them indeed. My first experience of the new BT-023s fitted to my own VFR800 was very positive. Compared to the Avon Storm STs they replaced, grip, feel and feedback were significantly better. Adhesion was improved so much that the suspension of the ten year old Honda started to show signs of age, with the rear shock doing a fair bit of wallowing under power. To be fair the old Avons I’m comparing the BTs with were more than a year old and had been through many heat cycles.

However, the same complimentary view of the Bridgestones came during a lengthy 1500-odd mile run to Inverness and back on a BMW R1200RT.

Despite the already heavy tourer being laden with lots of luggage, the tyres still felt very secure in corners and really boosted my confidence. The all-important feel, not something always evident in sports touring tyres, was also very welcome.

Even in the rain the BT-023s never gave me any cause for concern. With excellent stability, good cold weather performance and neutral steering, they’re hard to fault. Those tyres were the GT-spec version with a stiffer rear carcass and different front tread pattern specially designed for heavier machines like the RT

But it was during the official Bridgestone test along the roads of the Scottish Highlands that I discovered the tyres’ best performance. Sampled on a wide variety of bikes they performed extremely well. Even on a very light and powerful Suzuki GSX-R1000 – a choice of bike which underlines Bridgestone’s confidence in its product – I felt more than happy to push hard. I’d say their grip and general performance is as good if not better than BT-014s.

Checking the rate of wear of the rubber wasn’t so easy of course. Though at the end of my 1575 mile trip the R1200RT showed enough remaining tread depth to suggest life of up to 10,000 miles from the front, and 6000 from the rear is possible.

I’m very fortunate not to have to buy bike tyres thanks to my job as a journalist. But if I do need to request any, then the BT-023s will be my preferred choice of tyre for road use simply because of their comprehensive ability. I’ve been waiting for a sporty yet durable tyre like this for years.