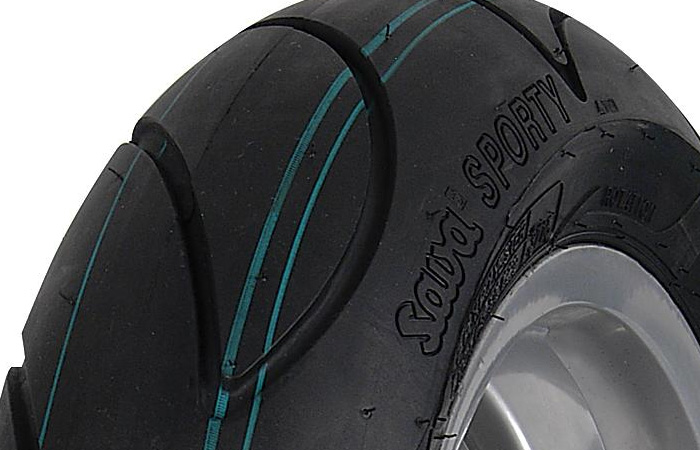 I have to admit to having some concern about this test. Virtually every scooter I’ve ridden in the past has had a twitchy, nervous, and edgy feel to it when it gets near its limits – especially the smaller ones.

I have to admit to having some concern about this test. Virtually every scooter I’ve ridden in the past has had a twitchy, nervous, and edgy feel to it when it gets near its limits – especially the smaller ones.

On that basis, I don’t mind admitting that being asked to ride a Yamaha Aerox 100cc scoot to the very limit to assess Sava’s new MC29 Sporty 3+ performance rubber was causing me the odd jitter.

As it turned out, my fears soon evaporated completely as my total faith in the new tyres’ grip and stability put me at ease whenever I used the little Yamaha scoot.

Once they’d scrubbed in nicely, a job I managed to do without incident, the Sava rubber felt more than happy when pushed hard under braking and cornering. So much so, that I had to go and ride the scooter on private land to test their sporty prowess fully.

Kemble airfield, in Gloucestershire, served as the proving ground where the Sporty 3s could be checked to their limits. I’d learnt by the time I got there that they worked well on the road in all sorts of conditions and could be relied upon to always give a solid performance. But on the wide open spaces of the airstrips I could ride the scooter as hard as I could, getting the Yamaha over to much greater angles than I was able to on the road. Changing direction suddenly, and cornering hard at speed obviously put the Savas under great strain, but you’d never have guessed it. And not only did they grip really well, but they also gave great feedback. I found this quality particularly invaluable and it really put me at ease when pushing hard at acute angles of lean.

My worries about the Yamaha sliding from under me were fully allayed after repeatedly trying to get them to do just that, and thankfully failing every time The only real limits I found, were the Yamaha’s itself, with the forks feeling like they were bending when I braked hard from higher speeds, and the suspension getting a little hot and bothered after constant loading and unloading.

The only opinion I can express about Sava’s MC29 Sporty 3s is a highly positive one in that I discovered that they can cope with anything you ask of them over a great range of speeds, temperatures and conditions. And because of that, for the first time, I learned to trust a scooter when I rode it really hard. And I couldn’t praise a scooter tyre any more than that.