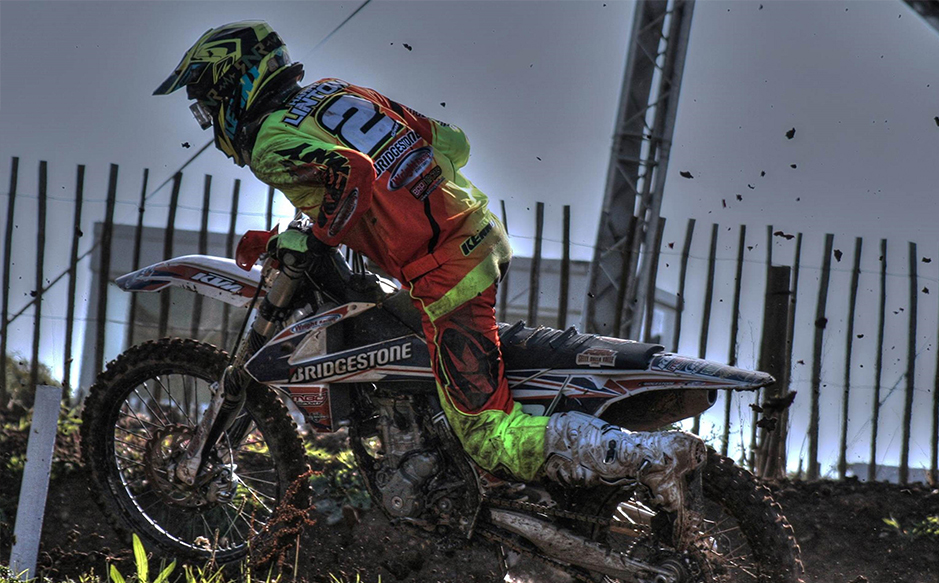 The tracks and their tears! Bridgestone’s 2016 motocross review

The thrills, spills, highs and lows of British motocross could not have been brought to life more vividly than Bridgestone, whose sponsored stars made a big impression with all manner of success stories in 2016.

Not only did the world’s largest tyre manufacturer support six young riders in their quests for success, but the company also sponsored the newly named Bridgestone BSMA National Series, which boasted more entries than ever before – with each race fully booked from November.

The association with the sport has allowed Bridgestone to extol the virtues of its BATTLECROSS X20, X30 and X40 products to a captive audience, with their outstanding performance traits being brought to life out on the track when each sponsored rider puts them through their paces.

As a result, sales have been stimulated and the company continues to be synonymous with premium performance.

Bridgestone’s sales and training development manager Mark Fereday said: “The Bridgestone name has really resonated with a lot of riders and spectators, so much so that people from other championships are keen to know of our plans for 2017.

“Press coverage has been high, our social networking activity has allowed us to interact with a large audience and interest in all of our products has definitely risen. It has been a season to remember and something to build on.”

Bridgestone’s sponsored riders have experienced way more ups than downs, thanks to some outstanding individual performances:

Josh Waterman:
Josh Waterman won’t forget 2016 in a hurry, after some memories that will live with him forever – both on and off the track.
The supremely gifted rider won the AMCA MX2 championship with one round to spare, which has never been done before.
And with the title in the bag – thanks to nine race wins from 16 – he missed the last round to be with his partner who was giving birth to his first child Freya.

Josh said: “I couldn’t have won the title without the Bridgestone X20s getting me out the start every race. I was thrilled to win it a round early because the pressure was building, knowing the baby was coming so close to the last round!
“It was my second year in this championship after finishing 2nd last year. It was really competitive with everyone wanting to beat eachother, so I am proud to be able to call myself a champion!”

Rob Yates:
The Redditch rider signed off the season in style, winning two rounds of the Bridgestone BSMA National Series in Penybont and Pontrilas.

After injury curtailed his debut season in the British Maxxis Championship MX2 class, Rob was back in the groove, also clinching the BSMA Finals championship at Culham Park.

He said: “Winning those last two races is definitely a boost. My pace is still there and those recent positive memories are just what I wanted.

“A couple of local tracks are all-weather surfaces which I’ll look to get out on, and I’ll keep working hard in the close season to get myself ready for 2017.”

James Hanscomb:
The future looks bright for Ledbury youngster James, who clinched British AMCA 85cc title after winning every race in the series.
The 14-year-old was also runner-up in the Bridgestone BSMA series after a terrific early season tussle with eventual winner Callum Beeken.

But more than the results and plaudits that are heading James’ way, the Herefordshire lad is just concentrating on enjoying every second of being out on the track, and long may that continue according to his dad George.

“He is doing things on his bike that he could never do 12 months ago. Naturally, we’re all very proud of James, but there has to be one main objective for 2017 – and that is for him to have fun.

“It can get quite serious when you’re riding for podiums and titles, but James is still so young and our perspective is for him to express himself and enjoy himself, which he certainly did this year.”

Harry Linton:
If ever there was an example of hard work reaping rewards then look no further than Harry Linton, who was putting in a shift away from the bike long before the season had even begun.

The 16-year-old embarked on a rigorous training programme months in readiness for his debut AMX season, knowing that improved strength was imperative in order to succeed.

Harry duly won the BSMA Bridgestone series after a titanic battle with Lee Truman, clinching the title with a superb ride from last to second in the deep mud at Penybont.

And he is now all set to win the Phoenix Tools premier MX championship as well, to prove that all of those miles on the treadmill were well worth the effort

“Harry’s success can probably be traced back to his winter training. He had a programme to stick to and was committed in the gym for a long time,” said mum Tracey.

“Because he went up into adult racing, he knew he had to get himself really fit. We’re very proud of Harry. He’s gained in confidence as well as strength and we have some wonderful memories from some amazing races.”

Silje Otte:
Until injury cruelly struck, Silje was making a huge name for herself in the sport. The 2015 Girls’ National champion was holding second place in the Acerbis Nationals in a notoriously tough field, until a fall at Farleigh Castle curtailed her meteoric rise.

Silje, recovering from a broken leg, said: “Things were going so well. I was making lots of passes and moving my way through the field. It is one of those things but I will be a stronger rider for the experience.”

Far from giving motocross a wide berth, the 18-year-old is heading off to Australia for a year to learn more about agriculture and yes, motorbikes!

“I’m itching to get back on the bike. I am looking forward to an exciting opportunity in Australia and now I can bear weight on my leg, I’ll be back behind the throttle in no time!”

Morgan Evans:
The slings and arrows of motocross misfortune were fired at little Morgan Evans for what must have felt like the duration of 2016, but the Himley youngster is desperate to bounce back!

An injury hit debut season in his small wheel 85cc category ruined his hopes of success, with several other injuries arriving just as the 11-year-old was looking like returning.

Morgan showed great progress with some top six finishes in the couple of rounds of the Bridgestone BSMA National Series when he was fit, to suggest that the future is just as exciting as it was 12 months ago.

Dad John said: “He has had tissue and ligament damage, he broke two ribs and even knocked himself out in Salisbury the other week. It has been a rough old time.

“For now, Morgan will be better for having a break and recovering from a lot of setbacks.”

Mum Claudette believes that some training with the legendary Mick Extance at his off-road experience in Wales has made a big difference.

She said: “Charlie has had a great season and has loved every second of the season. He is now preparing for the winter championship so he is keeping busy!

“He learnt a lot from spending time with Mick Extance, whose guidance and expertise has been invaluable.”